The Madeira River, one of the Amazon’s major tributaries, is the focus of intense hydroelectric dam development, part of a massive wave of infrastructure construction occurring across the Amazon basin.As currently planned, the Madeira Hydroelectric Complex, located in the Brazilian state of Rondônia, will consist of four dams and a navigable industrial waterway built along the river’s course, with serious implications for the exceptionally biodiverse freshwater and forest ecosystem, as well as for indigenous people and traditional river communities. A new study, which examined two of the complex’s already completed mega-dams — the Santo Antônio and Jirau dams — has found that the area flooded as a result of their construction was significantly greater than predicted by the Environmental Impact Assessment (EIA) carried out prior to the dams’ licenses being approved.

The study, published in Remote Sensing Applications: Society and Environment, was led by Sheila Cochrane, a geospatial analyst at South Dakota State University. Cochrane, who was a high school student at the time she carried out her study, was inspired to look into the extent of dam impacts after visiting the Santo Antônio dam, located near the Brazilian border, during a field trip. There, she witnessed “substantial flooding and forest death,” caused by the dam, extending all the way upriver into neighboring Bolivia. 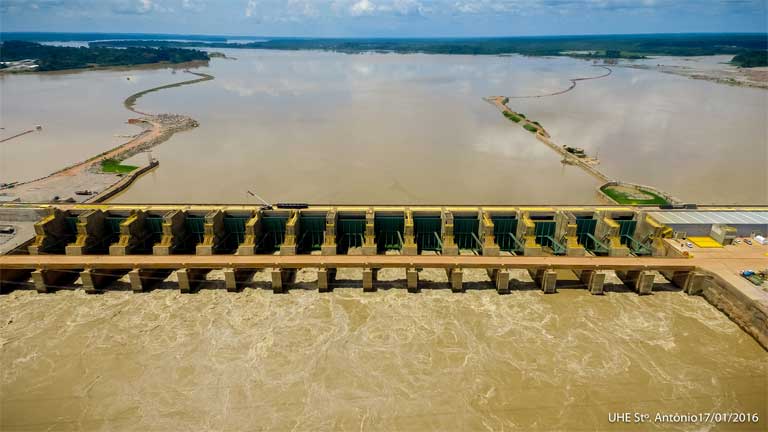 The Santo Antônio dam, on the Madeira River, Brazil, part of the Madeira Hydroelectric Complex. A wave of dam development across the Amazon basin is doing irreparable harm to freshwater and forest ecosystems. Photo by the Brazil’s Growth Acceleration Program (Programa de Aceleração do Crescimento (PAC)) on flickr, used under a CC BY-NC-SA 2.0 license

To investigate just how extensive the flooding was, Cochrane used Landsat satellite images to map and measure the area now under water in the vicinity of the Santo Antônio and Jirau dams, upstream of Porto Velho in the State of Rondônia.

She looked at images from a 10-year period (from 2006-2015) spanning the time immediately before, during, and after dam construction; the reservoirs for both dams were filled between 2013-2015. She then compared her measurements with the predictions contained within the Environmental Impact Assessments (EIA) conducted prior to the dams’ license approval. 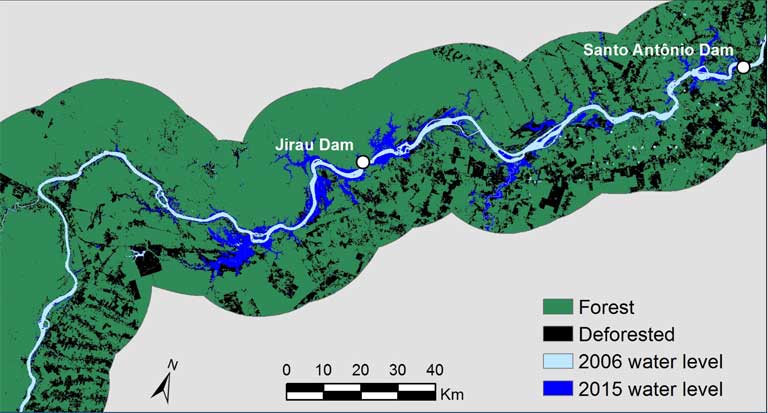 A new study used satellite images to quantify the extent of flooding caused by the Santo Antônio and Jirau dams. It found that flooding upstream was almost 70 percent greater than had been predicted in the dams’ Environmental Impact Assessment (EIA), and that serious flooding had crossed the border into Bolivia. Figure from Cochrane et al. 2017, used under a CC BY-NC-ND license

Cochrane wasn’t surprised to see the final figures, citing other studies that had correctly predicted such large areas of flooding prior to the dams being constructed. But what did surprise her was just how wrong the EIA had been.

She also emphasized that impacts would increase over time. “[T]he figures we provided are certainly conservative. Our imagery was taken during the dry season after the reservoir areas would have peaked,” she explained, with further flooding, not visible in satellite images, under the canopy. “In addition, the surrounding water tables will rise with the increased area of the reservoirs, killing even more forest. The point here is that the area of impact will only grow in the next few years and we are uncertain of how much growth that will prove to be.”

What does that mean for the wider ecosystem? Cochrane sees two especially important consequences: the interruption of sediment flow from the Andes into the lower Amazon basin, and the permanent inundation of the floodplain varzeaecosystem — a floodplain forest seasonally inundated by whitewater rivers that occurs in the Amazon biome. 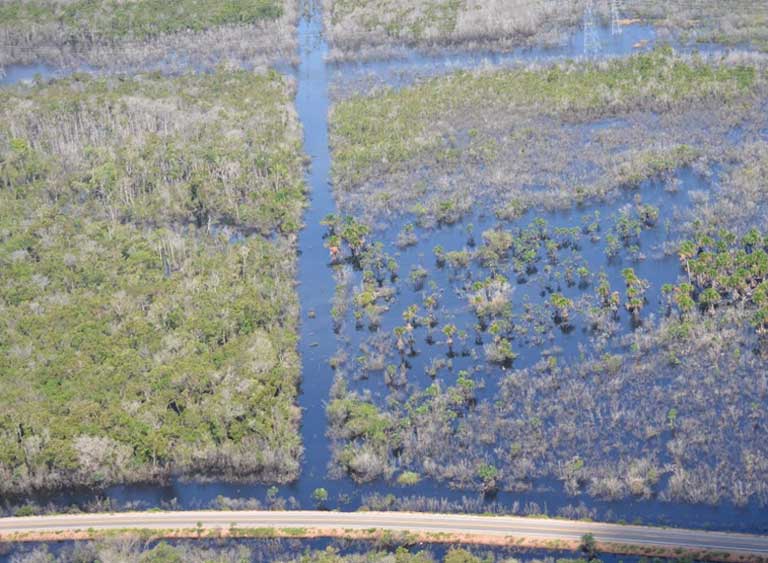 Degraded varzea floodplain forest, which is in the process of dying as a result of prolonged flooding. Over 50 percent more forest loss occurred after the dams were built than had been predicted in the EIA, the study found. The loss of varzea habitat will be felt by both aquatic and forest ecosystems. Its loss will also impact local livelihoods and human communities. Photo by Eraldo Matricardi

Half the Amazon River’s sediment flows down the Madeira River from Andean headwaters, and this makes a critical contribution to the nutrients and habitats that lie downstream. As sediment builds up behind a dam not only is this vital process interrupted, but the dam’s lifespan and efficiency is compromised.

“The rate at which sediments will accumulate at the base of the dam is of grave importance because sedimentation is the primary cause of dam failure, and with Porto Velho, a city of over 500,000 people, just below the Santo Antônio dam, failure of either dam could prove catastrophic,” Cochrane added.

The loss of the varzea, the seasonally flooded forest, has “huge financial and biodiversity implications since it plays a key role in both terrestrial and aquatic spheres,” explained Cochrane. That ecosystem’s location beside river channels means it is the first to feel the impact of reservoirs being filled.

“Even varzea tree species (which are adapted for seasonal inundation) will not survive permanent inundation,” explained Isabel Jones, of Stirling University in the UK. “The additional forest loss caused by the extra ~65 percent flooding found [in this study] may therefore lead to a loss of endemic tree species, as well as significant emissions of carbon, as dead trees biodegrade,” added Jones, who studies the ecological consequences that arise when forest islands are formed as reservoirs are filled.

In light of her findings, Cochrane thinks EIAs need to be more comprehensive, and should also incorporate greater uncertainty into their assessments. Understanding the interacting, cumulative effects of multiple dams across the Amazon basin should also be a priority. “If our understanding of the way individual dams will impact surrounding ecosystems is somewhat poor, then we have very little knowledge indeed of the impact hundreds of dams combined across the Amazon will have.” 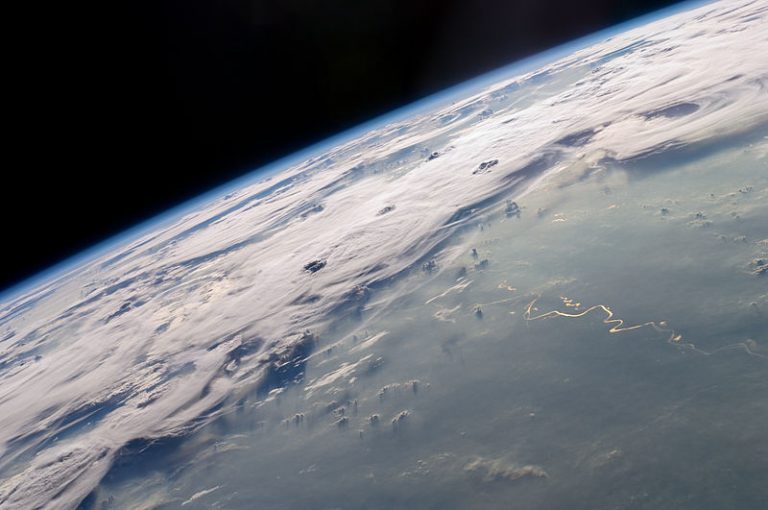 A view of the Madeira River from space, looking west-southwest from the Amazon Basin in Brazil toward Bolivia. Landsat provided images that clearly showed the degree of flooding before and after the construction of the Santo Antônio and Jirau dams. Photo by the NASA Earth Observatory

Camila Ritter, of the University of Gothenburg, is a proponent of incorporating technological advances, such as satellite imagery, into EIAs in Brazil. This study “shows how remote sensing can be used to accurately measure and predict the environmental impact of proposed anthropogenic activities,” she said. “The images used in the study are open and available for free, which makes these kinds of analyses cheap and straightforward to carry out,” something she says suggests “that it is, in fact, political rather than technological issues that prevent accurate environmental impact assessment right now.”

This issue also concerns Cochrane. “[I]t isn’t always the EIAs themselves that are the problem,” she explained, but rather the political pressure that can push harmful projects — such as the Santo Antônio and Jirau dams — through the system, projects “that either required better mitigation strategies or shouldn’t have been approved at all.”

A cursory look at the licensing process for these two Madeira River dams shows that the Brazilian government pulled out all the legal stops in order to get the projects approved, resulting in complaints from Bolivia after the dams were built, and contributing to devastating floods in 2014 in which 75,000 people were impacted and a quarter-million livestock died, with economic losses of at least US$180 million.

Reducing political influence on EIAs will be key if they are to be effective in better protecting the environment, Cochrane concludes: “While it will be important to create more accurate and comprehensive EIAs in the future, such political pressure must be prevented from controlling the environmental licensing process as it can completely undermine it.”