Bolivia’s massive supply of lithium, and the implications for the local community of Potosi (UPSTREAM JOURNAL)

the Salar de Uyuni is a vast salt flat spanning almost 11,000 square kilometers in the department of Potosí, Bolivia. Here, high in the arid Bolivian Andes, lie the world’s largest brine deposits of lithium, a light metal used in batteries that power everything from cell phones to electric vehicles. Brine lithium technology has the potential to enable Bolivia to escape its history of resource exploitation and instead become an equitable partner in renewable energy markets.

Stalled in Stage One

The Bolivian government began developing lithium reserves to capitalize on rising prices of lithium carbonate. Neighbours Chile and Argentina were already boosting their economies by exporting 100,000 tons of the stuff annually– almost half the global supply. But the Bolivian project remains stalled in the pilot plant stage.

A regional group promoting the rights of indigenous workers, the Federación regional única de trabajadores campesinos del Altiplano Sur (FRUTCAS), first approached the Bolivian government in 2007 with a proposal to launch lithium development in Potosi. The one requirement was that the project remain 100% state-owned so the region could directly benefit from economic and infrastructural investment.

Surrounding municipalities were in favour of this initiative. Patricio Mendoza, the mayor of the town of Uyuni which borders the salt flats, explained that the city’s support was based on the potential for economic benefit. “The project was first born in defense of natural resources of the Southwest region that should always be in state hands.”

Since then, the MAS government has spent over $400 million financing the project. The first phase installed a pilot plant west of Uyuni, in Colcha K, a municipality of several cantons with some 10,000 Quecha people, to test methods of recovering lithium carbonate from the Salar brine. The project has been stalled in this stage, producing only industrial quality lithium instead of the more refined battery quality. The plan was for the second phase to industrialize and expand past the pilot plant, and then finally manufacture value-added goods like batteries and cathodes.

Map of lithium development plants in the Salar de Uyuni. It situates Colcha K (South end of the Salar) where the first pilot plant was constructed as well as Uyuni, a nearby municipality to the East. Photo: Yacimientos de Litio Bolivianos, (https://www.ylb.gob.bo)

But citizens are becoming skeptical of these promised developments. When I spoke with him about the lithium project, Sr. Mendoza sounded fatigued by the venture. “The designated time for the initial stage has been lengthening a lot, and bit by bit its validity has been lost,” he told me. “The lithium project continues to be supported, but not with the same vigor as before.”

Pablo Poveda is a researcher in extractive industries at the Centro de estudios para el desarollo laboral y agrario (CEDLA), a nonprofit tracking labour and agrarian development. He has been monitoring environmental costs and the state budget for lithium extraction from La Paz and confirmed that the project has been slow. When I spoke with him in September he said, “The project is delayed. They have to produce over four hundred tons of lithium carbonate for the first phase and right now they have only produced twenty four.”

For hundreds of years, colonial powers and foreign corporations have ravaged the natural resources of Bolivia. Ironically, this legacy began with Spanish settlement in Potosí, home to the silver mountain that enriched 16th century Europe. Multinationals have since exported tin, zinc, and natural gas, leaving Bolivia one of the poorest states in Latin America, with little infrastructure for future development. Evo Morales, Bolivia’s first indigenous president, accepted the FRUCTAS proposal and launched lithium development with hopes to alter this legacy. 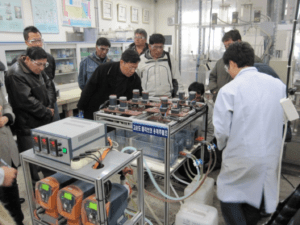 This South Korean investment effort brought Bolivian engineers to Chonnam National University in Gwangju for a week of training before KORES dropped the project. Photo: courtesy of Dr. Tam Tran.

Bolivia’s development in the Salar de Uyuni has garnered international attention as lithium-ion batteries are most efficient kind for renewable energy storage. In 2012 Korea expressed interest when Chonnam National University and Korea Resources Corp (KORES) sent a sample of the brine from the Salar de Uyuni to a lab in Gwangju, South Korea.

The university and KORES tested whether purer levels of lithium carbonate could be extracted from the Bolivian brine. Dr. Tam Tran, a chemical engineer who worked on the project, says Bolivian brine has low average lithium concentration, and that it is “bogged down with elements like magnesium or calcium and needs to be evaporated forty or fifty times for desired levels of mineral purity.” Precipitating lithium carbonate from the brine requires massive fresh water evaporation pools.

Even so, the technical part of this venture was successful. Dr. Tran was able to develop processing techniques to separate high quality lithium carbonate from other compounding minerals in the Bolivian brine. However, the commercial aspect fell short. After many exchanges with the MAS government, KORES decided to drop the project. There was speculation that this was due to the geological complexity (especially lack of water), poor infrastructure, and fear of renationalization.

State-run lithium precipitation poses serious environmental risks despite MAS’s commitment to “integral development,” a model that balances human needs with sustainable extraction of natural resources. Morales’s government champions this development as a central tenet of the philosophy of Vivir Bien, rooted in indigenous values of collective decision-making, transparency, and sustainability.

Yet Bolivian academic Raúl Prada notes that incoming industrialization would take water resources needed to sustain rural economies. The pilot plant sits on the periphery of the Salar, adjacent to Colcha K. These communities rely on the San Geronimo River and Rio Grande delta to cultivate quinoa and raise livestock. Such agriculture contributes to food security in Potosí, a department whose inhabitants face high levels of extreme poverty.

Prada argues that MAS could have promoted a more eco-friendly industrialization of lithium, one that would reflect local opinion and ensure that lithium processing would not contaminate water sources. Prada was vice-minister of strategic planning in the first Morales government, and helped conceptualize Vivir Bien. He left his position when he came to believe that the government did not prioritize indigenous initiatives.

CEDLA anticipates pollution of “4,000 tons of residual lime sludge per day” in areas like Colcha K if the technique chosen for lithium carbonate production is implemented. A state representative assured citizens that technology was being developed to avoid magnesium hydroxide and calcium sulphate waste. However, the construction tender does not include any special land protection in its constraints, and Bolivia’s environmental protection laws are notoriously flimsy. Across the border, in the Salar de Atacama of Chile, a natural ecosystem has been erased to accommodate lithium mining.

Rafael Ibañez, a tour guide in Uyuni, is concerned with the impact for his business. “People who work in tourism are in total disagreement of this project,” he said. Factories and evaporation pools crowd the natural scenery of the Salar, hurting the tourism industry local communities rely on. However, Ibañez is also a municipal councillor, and he understands the lure of promised infrastructure and economic growth.

State management: little to no consulting

This kind of resource extraction seems contrary to Vivir Bien, but the government claims the concerns can be reconciled. Though lithium development is environmentally disruptive, at least it would guarantee Bolivians full sovereignty of their national resources if done by a state agency.

However, critics say the MAS government has not conducted enough consulting on lithium development. According to Poveda’s research for CEDLA, “The central government is undertaking the lithium project by themselves and not integrating other parties that have valuable things to say, whether technologically or in terms of what could be beneficial to the community.”

Since 2010, the Comité Cívico de Potosí has mobilized local groups demanding a greater role in Morales’s “process of change,” the MAS government’s transformative stance on decolonization, alternative development, and path towards Vivir Bien.

Mayor Mendoza says that there are challenges in communication between his municipality of Uyuni and the central government, and that regional groups are not updated with critical information about the project and so cannot establish informed opinions. “In 2008 communication was fluid, but we no longer have this privilege. We learn about the project via the press. Or announcements by mass media, such as television, news, nothing more.”

Prada says that the pilot plant and public companies as working in “a dense fog, maintained by the government and its supporters.” As such, lithium deposits are not the resources of the Bolivian people, but of the MAS bureaucracy and its political allies. Prada sees the MAS method of lithium development as hardly different from neoliberal extractivism.

Only the indigenous FRUTCAS federation continues to enjoy communication with La Paz, perhaps because they are MASista—ardent supporters of the Morales government. However FRUCTAS first proposed the lithium project under the premise of natural resource sovereignty. It is unclear what its members think of state company Bolivian Lithium Deposit’s (YLB) proposal to allow outside investment and trade half of the future lithium expansion to a foreign partner.

In December 2017 YLB called for international investment proposals, with a budget up to $750 million, to partner in accelerating lithium carbonate production. Whoever steps up will gain a 49 percent stake in the industrial expansion they facilitate. Prior to this the Bolivian government only commissioned foreign companies like Chinese Li Yi Dake Trade and German K-UTEC to build plants or provide supplies.

The Comité Cívico de Potosí also advocates for greater profit redistribution; under current mining law Potosi receives only three percent of the gross production value of lithium carbonate and other resources. It proposed that the Plurinational Assembly increase this amount to forty percent, but the effort was rejected. Poveda from CEDLA agreed with the proposal to increase the local benefit. “Potosi is a department rich in natural resources but they don’t receive much,” he said. “It’s actually very impoverished though it has a significant contribution to the national GDP.”

Under the 2009 constitution the Bolivian state must consult civil society groups whenever an ecosystem is disrupted by natural resource extraction. The constitution also stipulates that natural resources are state property, and the royalties they bring must be distributed to serve Bolivian collective interest. In September, 2016 Bolivia sent its first lithium export of fifteen tons to China well under market price—of doubtful benefit to the Bolivian public.

The future of lithium development

Supporters of lithium development argue industrialization will generate jobs, develop the region, and produce wealth for Bolivia. However, the YLB pilot plant created only 140 direct and indirect jobs and has not made a dent in the global lithium market.

Since 2015, lithium carbonate prices have more than doubled and are now up to $25,000 per ton. Pressure of being shut out of the market pushed the government to invite foreign investment proposals despite the inherent distrust many Bolivians bear towards multinationals.

It is expected that whatever company is awarded this contract will industrialize the Salar and equip it to produce batteries and cathodes. Since China is Bolivia’s largest bilateral creditor, many speculate it will become the principal investor for this venture, especially since the country has already shown its willingness to pay high prices to corner the electric vehicle market.

Community leaders were promised that lithium can be strategically exploited for value-added products. But foreign contractors who operate mining projects already disregard labour norms, community concerns, and environmental laws on Bolivian soil. Those concerned with human rights wonder if Bolivia will hold foreign companies to more rigorous standards than they did their own state-run institutions. Sr. Ibañez remains hopeful, saying, “More than anything, Uyuni is an argument for Bolivia.”